LVL Up is a Las Vegas gaming convention but I was in such a rush to go to cons for exposure for the original Kickstarter date (now postponed). I thought it would be good to go to, the website said there were card games and it was within driving distance. I went out there for a two-day trip with a friend, who is not actually part of the support team so is not really familiar with the games. Anyway, I showed up to an event in a large building. It had arcade games, an exhibitor area, a stage, and a large selection of tables filled mostly of CCG (Collectible Card Games) players. Honestly, for the right person, it was great. There were shows and video games, and it was just a neat event. I faced certain challenges, however, since I went with the goal of introducing Battle Gnomes to other people. I found an area in that section to put my game but everyone around me came with a specific CCG in mind to play. Magic the Gathering, Pokémon, and some new ones I hadn’t seen before. It was rough, and I was very uncomfortable. That about sums up that experience.

I did manage to go and see a friend in the city that night. On the way back to the hotel I checked the Phoenix Comicon fan page, and it’s a good thing I did! A guy posted about a bar he was at IN LAS VEGAS (not for the convention, just coincidentally). It was the Millennium Fandom Bar, a bar for people interested in things like Star Wars, conventions, gaming. So I decided to look it up, and it was right around the corner from my hotel! As random as it was, I decided to go check it out. The friend came with. We walked the two blocks to get there, and had a great time. Met a couple of people and chatted about the games. I got more interest there than at LVL Up, which was great. I think because they weren’t looking for their specific game tournaments but were just sociable. Also, it was just fun. The owner is a nice guy.

Day 2 wasn’t much better for my success at the event; gamers were generally looking for their specific tournaments. I decided to chalk it all up to a learning experience and left the event early, around 2pm. They were moving tables out of the way for a show so it was a good time to go. What I learned was I need to do better research on events I go to. I was so determined to get it out there, but that was a bad avenue to go down. Not the right group. Also, I am not great at promoting my game. Rather, I was rather shy about it instead of “hey, want to try a new game?” loudly so it was noticeable. The friend was better at that, and helped with pictures. However, next time I do a thing I need someone to promote the game(s) if possible, and someone who is familiar with the product. I am not as effective at doing all the things at once. I was glad for the experience because 1.) the Millenium Fandom Bar was awesome, if anyone goes to Las Vegas I’ll recommend it and 2.) I figured out better planning for things in the future and it wasn’t a large expenditure. I’d be really upset if this happened at an event further away where a lot money was sunk into it. I just have to be careful moving forward.

Also, if you’re interested, feel free to check out either the LVL Up event or the Bar: 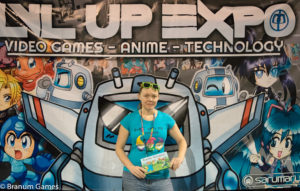